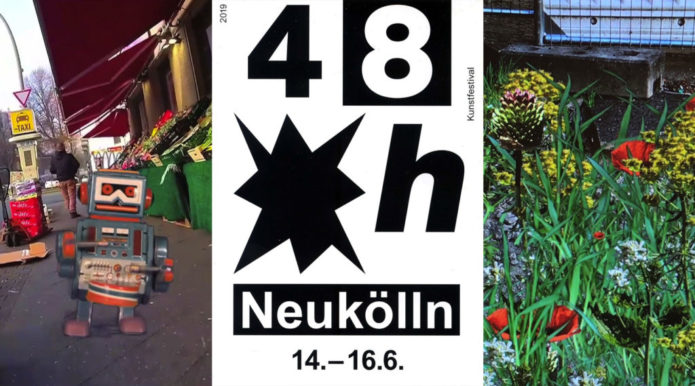 The art festival 48 Stunden Neukölln takes place under the theme “Futur III” from 14 to 16 June 2019.
Since it was founded in 1999, 48 Stunden Neukölln has developed into an event that serves as a role model for countless others. It is the largest independent festival of the arts in Berlin. The district of Neukölln is transformed, for 48 hours, into a place where artistic experimentation is fostered. Art projects are presented that were conceived specifically with Neukölln in mind, inspired by or dealing with local realities of life, the diversity to be found here and the special demographics of the area. Open-ended, process-orientated endeavours that foster creative discourse are carried out without limitations, and in the process, the innovative character of the festival is intensified. Works of art that were realised for the festival have an impact beyond the district of Berlin-Neukölln: many of these projects take a strong stance on societal issues and support lasting exchanges of ideas on the international art scene. (Source: 48-stunden-neukoelln.de/en/page/mission-statement)

Maria Korporal takes part in the festival with two projects that are specifically related to Neukölln. 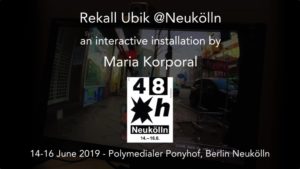 A screen shows a video of a small wind-up toy robot constantly crossing the roads of Neukölln: this is Rekall, the robot that guides you around the world and creates artificial travel memories. In the upper corner, the names of 165 countries flash in succession, just as many as the nationalities of the population in Neukölln. You can always click on a button in the bottom corner of the screen: click here to rekall the future. Rekall will stop and you will find your own face in the middle of the street: a postcard, like a memory of an imaginary future in another country, far and yet so close.
The postcards will be shown during the exhibition on a second screen as a slideshow.
Rekall Ubik @Neukölln is part of The Rekall Project. The project is a work in progress. Several versions have already been created, with different interactive elements, like a webcam or a keyboard. Each version is represented by a new robot, as if the previous one has been reassembled. 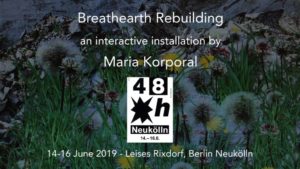 Breathearth is an interactive installation made with a Raspberry Pi, a small earth globe with built-in microphone and a beamer. People are invited to breathe on the small globe. With every breath, flowers and leaves are projected onto a surface or object until it is covered with color and life. At each new session, other combinations of vegetation appear – it is always a surprise which flowers are created by breathing. When the breathing stops, the vegetation disappears after a short time: the earth needs our breath to stay alive …The future of the earth is in our hands!
For 48 Stunden Neukölln Maria Korporal has created a special version of the project: Breathearth Rebuilding. As a background for the vegetation projection, various photos of construction sites in Neukölln have been used. At each session a different background appears, randomly determined. When breathing on the globe, grass and flowers grow on the construction site.