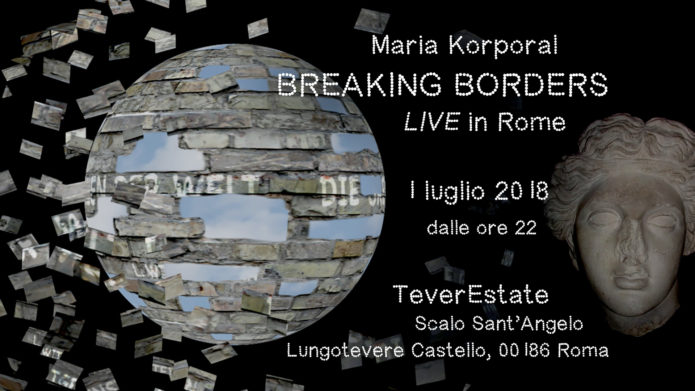 The work in progress Breaking Borders arrives in Rome!

After the successful live video performance in Berlin, Maria Korporal presents her project in Rome in a very special edition dedicated to the Eternal City.

“Breaking Borders” is the evolution of the installation “Die Grenzen der Sprache”, which the artist presented for the first time in April-May 2017 as part of the collective exhibition “Update 17” in the VBK gallery, Berlin.
The work presents the statement “Die Grenzen der Sprache sind die Grenzen der Welt” by Ludwig Wittgenstein. The German word “Grenzen” has a double meaning and the phrase can be translated in two ways: “The Limits of Language are the Limits of the World” or “The Borders of Language are the Borders of the World”.
The incomprehension between different cultures – the most important cause of the problems in the world – can only be combated if people are willing to understand each other’s language and communicate with each other.

The starting point is a round video of an infinite wall that enclose the world. The work is interactive and allows you to write words or phrases within the video. When the text is saved, the wall breaks and discovers the open sky with floating texts: all the entered words are stored in a database. So the more the session proceeds, the more words float in the sky.

In the different live versions of “Breaking Borders”, the artist intervenes in real time with texts she has collected on the spot and in the audience. Depending on the location, she introduces other videos and other images, in addition to the round video of the wall. In this edition in Rome the artist will follow a special path that will be concluded by dozens of walking Roman statues, which communicate with the public and transmit an important message in the context of the project.