The work presents the statement “Die Grenzen der Sprache sind die Grenzen der Welt” by Ludwig Wittgenstein. The German word “Grenzen” has a double meaning and the phrase can be translated in two ways: “The Limits of Language are the Limits of the World” or “The Borders of Language are the Borders of the World”.
The incomprehension between different cultures – the most important cause of the problems in the world – can only be combated if people are willing to understand each other’s language and communicate with each other, even if that is not easy.

The installation consists of a mini-projector and a computer with mouse and round keyboard. The projection is a round video of an endlessly turning wall that has totally enclosed the world. When you click on the image, a box will appear where you can enter text. The visitors of the exhibition are invited to write a word or a very short text. This is less simple than it seems: the round keyboard does not have all the letters of the alphabet, so you have to be inventive.
When you send the text, the wall breaks and you can see the open sky with floating texts.
After a few minutes, the video with the wall starts again, and visitors can play anew. If nobody plays, the wall simply turns around with the text of Wittgenstein.
The words that “fly” around the sky are all the words that the visitors have entered, they are all stored in a database. So, the more the exhibition progresses, the more words will float in the sky. 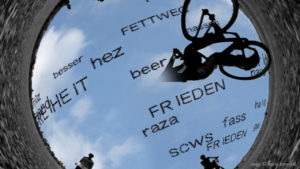 The project evolved in the video “Breaking Borders”, selected for the W:OW Project 2018: see dedicated page