TV Broadcast of the exhibition

The Labyrinth Room in the exhibition

The opening took place as part of the Zinnober weekend, which starts the autumn season every year with galleries, art houses and artist groups. Inspired by the artists’ festival around Kurt Schwitters in the 1920s, Zinnober celebrates art in Hanover.

KORPORAL LABYRINTH
The four videos in KORPORAL LABYRINTH tell a story about an inner journey in different stages. The drawing of a labyrinth was the starting point for the project, along with a series of footage shot mainly from July 2013 to January 2014. In the Korporal Labyrinth the artist explores different ways of walking through the labyrinth.
In 2018 she has started the project again, with the drawing of new labyrinths as a “drawing performance” in connection with the projection of the videos.
One of these labyrinth drawings is the basis for the new interactive video installation KORPORAL MAZE-A-MAZE or the “Railway Flower Labyrinth”, 2020. By beating a handmade shaman drum with a labyrinth drawing, viewers can find their way into the same labyrinth on the video screen. When they reach the center, a surprising event unfolds: a railway flower blooms from the heart of the labyrinth. Railway flowers are the objects that the artist finds on her walks along railway tracks. You almost get the impression that things have grown spontaneously out of the railway, but then you realise that all these things have been left behind by people who have walked the same path. See also the photo work Railway Flowers, actually on exhibition in the Berlin gallery GG3. 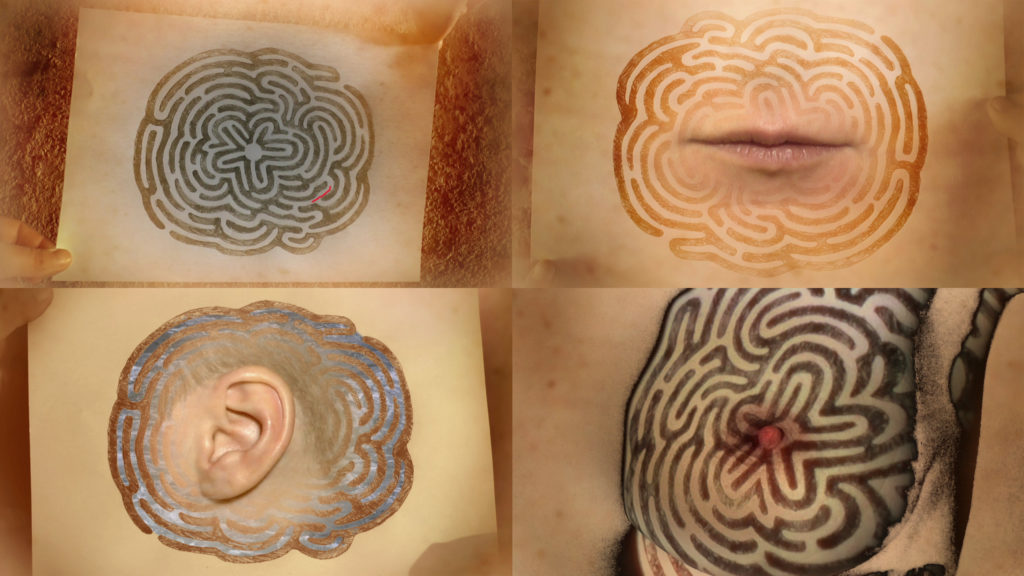 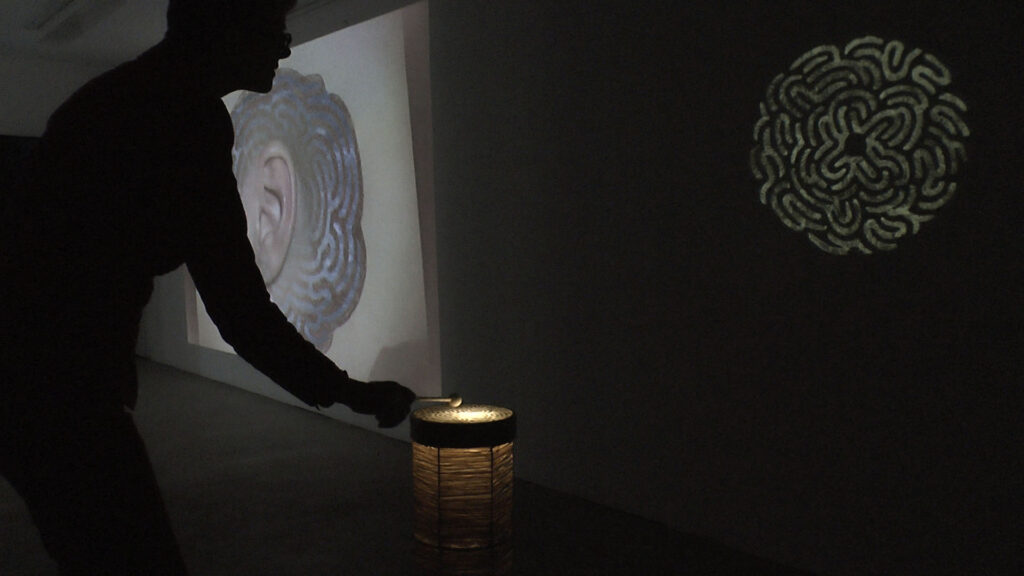 KORPORAL ZOO
“Korporal Zoo” is a series of video works by Maria Korporal, which observe the animal and human world with several perspectives: cultural, social, environmental. The project is a work in progress started in 2010. The videos in “Korporal Zoo” have been designed with a wide variety of techniques and each work is an animated mixture of photo and film footage, as well as drawings and collages.
The project consists of 9 videos and a video installation “Reynard the Fox”, with 12 triangular canvases (digital print with manual intervention) and a video projection that plays with all the elements. 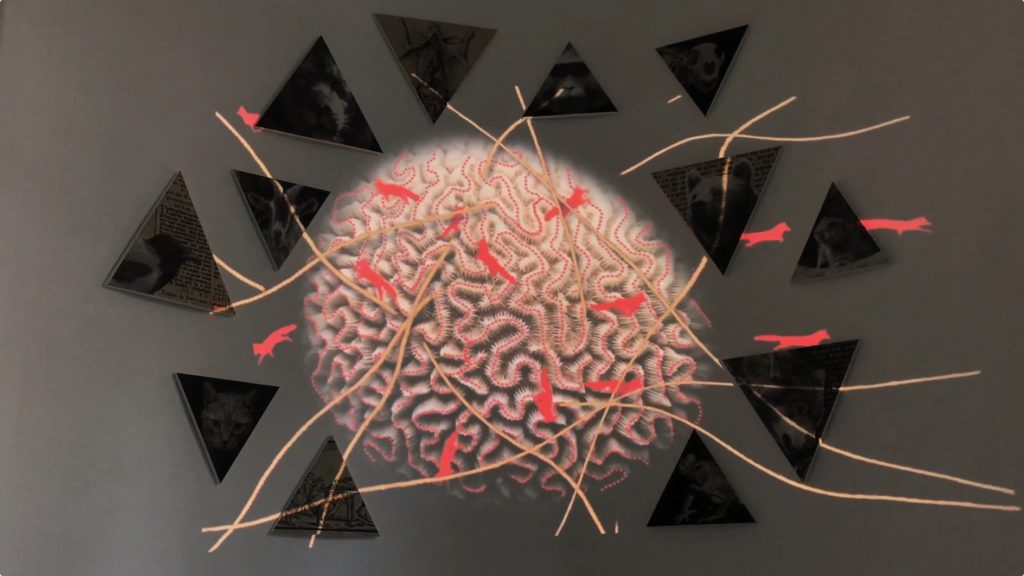 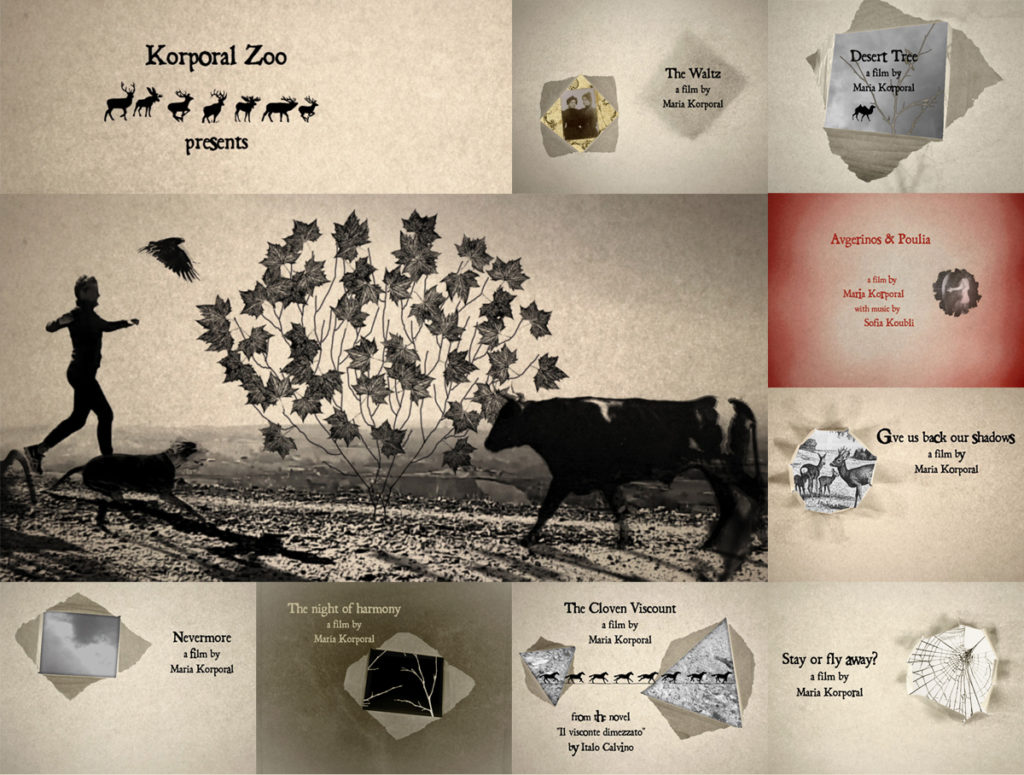 A CAT HAS 7/9 LIVES
“A Cat Has 7/9 Lives” includes a series of objects and a video in animation and mixed media.
Old and new photos, scanned materials such as rope, engravings in plexiglass, film, leaves, were processed into a series of small boxes. Afterwards a video was created from these, in which the images were reworked and enhanced with various digital animation techniques.
The seven lives of the cat follow each other in a time line, and each life is announced with bells or drums. The seventh life is the longest part of the film and is the secret of the search for the hermit, i.e.: the spiritual search. The hermit is not found: the sublime remains unreachable. 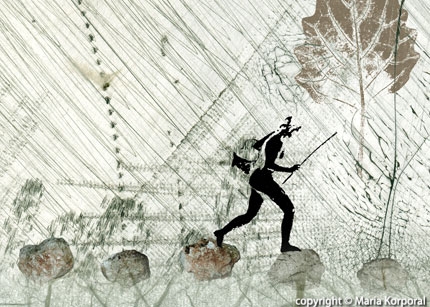 A Cat Has Seven Lives, video 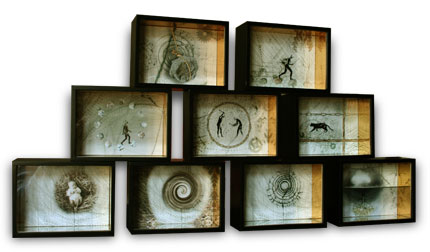 A Cat Has Nine Lives, objects 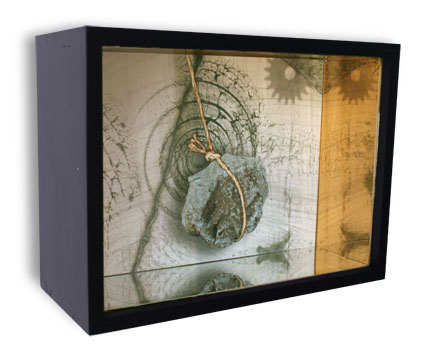