Rekall Golem @Praha has been shown in the exhibition ZEITVERSCHIEBUNG, 1-14 April 2019 in Gallery VBK in Berlin. 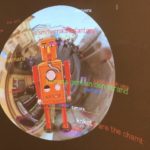 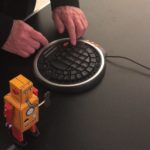 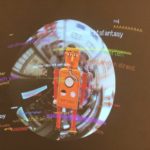 The project started in 2016 with the first installation Rekall travelling around the world. The work is inspired by a short story by Philip K. Dick, in which people who want to travel, but due to various circumstances cannot go, ask Rekall Inc. for help. Rekall promises its customers to implant artificial memories that are indistinguishable from real ones. Although the customer is informed in advance that the “experienced” is not real, the “memories” evoke the same emotions as real experiences.
The work emphasizes the absurdity of mass tourism, the superficiality of the short long-distance trips and hasty weekend city trips, which sometimes seem to have the only goal of getting a palpable proof “that one has been there” – while the ecosystem is destroyed and the original culture is lost.
The robot “Rekall” is a small wind-up toy robot. While the first “Rekall” ran on a small globe and made the earth spin around under its feet, letting the visitors select a country from a list of all countries in the world, “Rekall Ubik” is a city traveller, continuously running in the streets. The visitors can click any time on a button in the right corner of the screen: “click here to rekall a memory”. Rekall will stop and the visitor will find his or her own face in the middle of the street. Like in the previous version, a virtual postcard will be sent to the system. All stored postcards are printed by the artist and collected in THE REKALL BOOK, which can be seen during the exhibitions of the work, or in the artist’s studio.