From 1998 to 2004 Maria Korporal has realized several installations, composed of images elaborated on the computer and put together in structures of imitated television screens. This peculiarity, which recalls the idea of the video-wall, has been explained by the artist like this: “My works are built up in structures of imitated television screens. I think contemporary imagery finds its way for the largest part through screens (television, internet) which has an important effect on the way of how we see and experience reality: distorted.”
In The Rebellious Egg the imitated television screens are united with a real screen, in which we see an animation of digital images, accompanied by a suggestive soundtrack. The theme is the egg, ancestral symbol of live. The egg is rebellious, because it jumps and bumps, like a heart went crazy, which beats are amplified by the music. 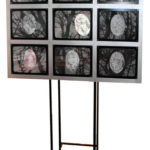 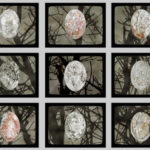