A screen shows a video of a small wind-up toy robot constantly crossing the roads of Neukölln: this is Rekall, the robot that guides you around the world and creates artificial travel memories. In the upper corner, the names of 165 countries flash in succession, just as many as the nationalities of the population in Neukölln. You can always click on a button in the bottom corner of the screen: click here to rekall the future. Rekall will stop and you will find your own face in the middle of the street: a postcard, like a memory of an imaginary future in another country, far and yet so close.
The postcards were shown during the exhibition on a second screen as a slideshow.
Rekall Ubik @Neukölln is part of The Rekall Project. The project is a work in progress. Several versions have already been created, with different interactive elements, like a webcam or a keyboard. Each version is represented by a new robot, as if the previous one has been reassembled.

The work is inspired by a short story by Philip K. Dick, in which people who want to travel, but due to various circumstances cannot go, ask Rekall Inc. for help. Rekall promises its customers to implant artificial memories that are indistinguishable from real ones. Although the customer is informed in advance that the “experienced” is not real, the “memories” evoke the same emotions as real experiences.
The work emphasizes the absurdity of mass tourism, the superficiality of the short long-distance trips and hasty weekend city trips, which sometimes seem to have the only goal of getting a palpable proof “that one has been there” – while the ecosystem is destroyed and the original culture is lost. 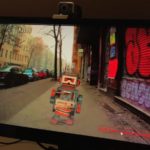 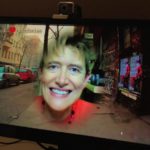 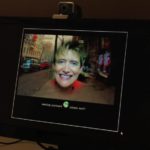 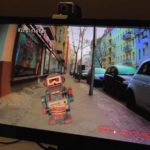 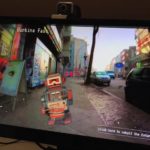 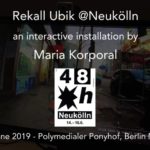