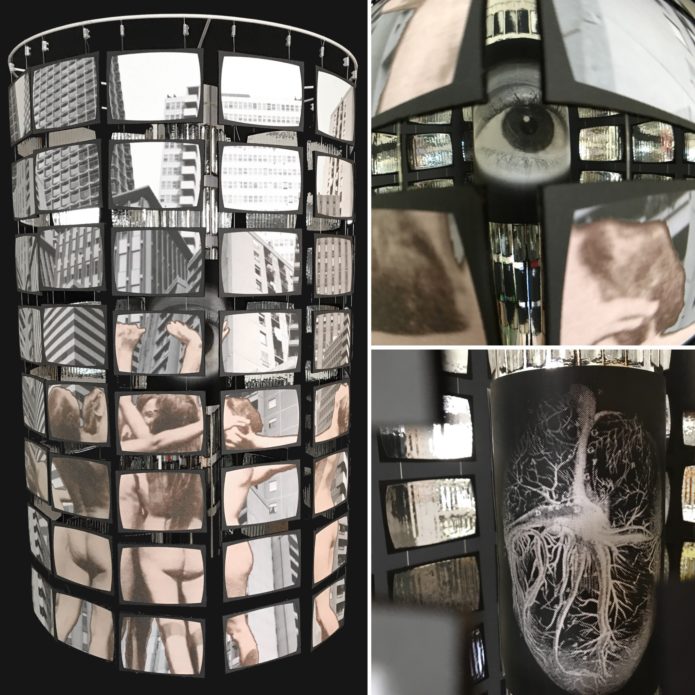 NEW VERSION 2018, with a new interpretation of the inner eye & heart, on exhibition in Prague in May 2018!
read more about the exhibition 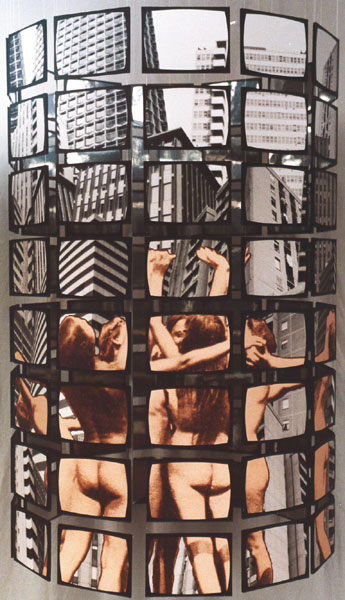 The Jewish legend of the Golem, a clay puppet that can be animated with cabbalistic powers, has been for a long time a starting point for many creative persons, from writers to film-makers, from philosophers to scientists. Many have turned it into a symbol of technology; others consider the Golem representative of the modern thought in absolute, able to suit itself in different times and circumstances. In her essay the artist gives some examples.
Maria Korporal has created her interpretation of the golemic universe with the work “The Eye of the Golem”. The installation has a cylindrical form and is suspended to the ceiling. It represents on the outside an urban landscape, while on the inside a different scene can be seen, composed of mirrors: the inner part becomes infinite space. So the work has an external side and an inside, representing two different worlds which are contrasted, but at the same time depend on each other.

Interview with Maria Korporal in 2000:
Where did your interest in Golem come from?
M.K .: “My first meeting with the Golem occurred during the reading of Gustav Meyrink’s novel The Golem, at the beginning of 2000. I had already read other books by this author, but this one struck me the most. I did a series of Internet searches on the Golem and I found a lot of interesting things. Then the idea of ​​dedicating a work of art was born. “
In what way do you consider the Golem a symbol of technology, or the representative of modern thought?
M.K .: “I learned the idea of ​​the Golem as a symbol of technology, etc. only when reading articles and books about it. The Golem symbol of technology is a very interesting and thought-out idea, but I personally prefer to imagine the Golem as a symbol of modern imagery. Many of my works (even those made before the Golem) are built in fictitious TV frames. I think that the imagination of mankind in the contemporary world is largely carried out through the screen (television, internet), which then has important effects on our way of seeing and experiencing (distorted) reality. This is the main theme of my artistic research of the last years and the idea of ​​the Golem fit perfectly in it.“
In what sense does your work represent the Golemian universe? Or rather, in what sense does the Golematic Universe find representation in a work that fuses the two universes, internal and external? And what exactly are the two contrasting worlds?
M.K .: “The golemic universe (cylindrical = universal) is divided into two worlds:
– the “external” one, that is the concrete and material reality, the external part of the “cylinder”, naked bodies and their concrete dwellings.
– the “internal” one, that is the imaginary, the “internal space” of the human mind. The inside of the cylinder is composed of wavy mirrors, with two elements introduced: the Eye (see), which is the instrument of creation and the Heart (living), which has the ability to animate it. Both elements are reflected to infinity, but in an increasingly distorted and fragmented way, in this space of irregular mirrors. A living being imagines but, in turn, is also imagined, ad infinitum, with a tendency to cancel itself (because of the increasing distortion).
I must also underline that there is no just and absolute interpretation, the act of making a work of art goes beyond words and I often “discover” new interpretations too, long after I have done the work.“
So, what is the “eye of the Golem” looking at?
M.K .: “The eye of the Golem looks at itself.” 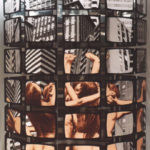 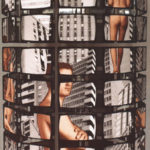 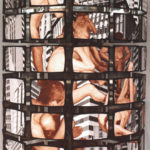 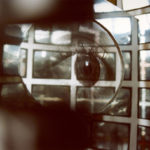 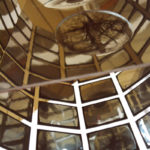 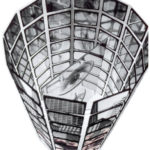 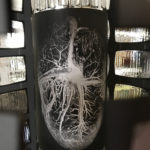 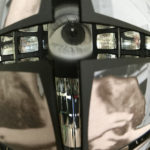 Between Memory and Destiny