The video above shows some excerpts of the projection during the exhibition in Sala 1, Rome, in May 2018.
The project is a work in progress. A new, independent version is entitled “Songlines”, click here to see info and trailer, and has been shown in various exhibitions, among which “Under Another Roof” in IA&A at Hillyer, Washington DC.

description:
In the culture of Aboriginal Australians, the long walks in the desert of individuals who undertake the Walkabout* (as mentioned by Bruce Chatwin in “The Songlines”, 1987) play an essential role in allowing contact and exchanges of resources (both material and spiritual) between populations separated by enormous distances. In my work, I let myself be guided by the idea of the Aboriginal Australians to see a “territory” not as a determined piece of land, but as a dynamic network of paths, tracks, and songs – so well described by Chatwin.
The video sequence begins with a projection across the entire surface, so the video extends into the inner part of the installation, and falls partly on the work of Anita. The initial image is the seashore with the eternal fluctuations of water, rendered in circular form, and the white line of the waves’ foam is transformed into spirals and concentric circles. After a few minutes the water leaves space to the sand, the concentric circles become dashed lines and the projection becomes a video-mapping on the 4 white canvases. On every panel a different thing happens: one hand digs a bone from the sand while another hand buries a leaf, one pulls out a folded piece of paper, opens it and reads the word “life”, the letters fly away and turn into other languages, one hand throws a stone from one panel to the other – in short, it is a game of transformation and exchange of objects and words between different panels. After a while everything is flooded by the sea water again and other scenes arise out of the sand.

Photos during the exhibition: 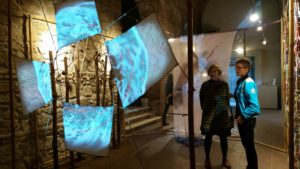 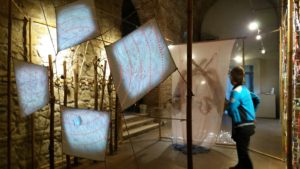 Some videos and photos of the work in progress: 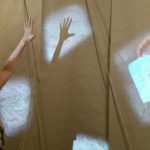 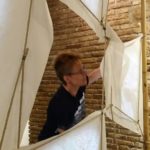 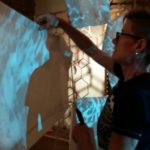