Leonardo da Vinci’s drawing of a male figure perfectly inscribed in a circle and square, known as the “Vitruvian Man”, illustrates what he believed to be a divine connection between the human form and the universe. Beloved for its beauty and symbolic power, it is one of the most famous images in the world. But what would happen if a female figure takes the place of the male figure of the Vitruvian Man? Will the divine spell with the universe brake up?
Less famous than Leonardo da Vinci, but well known and important for his pioneering work in photographic motion studies was the English photographer Eadweard Muybridge. His sequences of the human figure in motion show men and women occupied with several activities. A closer view reveals a traditional role pattern: the men manifest themselves in amazing athletic movements, while the women are busy with domestic activities or children. One of the sequences that deeply impressed me is called “Turning Around in Surprise and Running Away”. It shows a naked woman who covers her eyes and her genitals while she twists her body away from the camera.
Muybridge’s woman and Leonardo’s man are physically similar in many respects. They both express the ideal forms and proportions set by the classic standards of human beauty, but their self-awareness of the place in the world they belong to seems very different. The video endorses this observation and shows symbolically how the eyes of society guided by conventions determine this attitude. 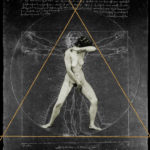 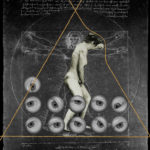 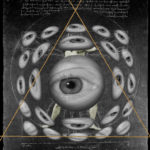 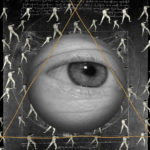