The video above is a 3-minutes trailer*teaser.
The whole video is more than 13 minutes long and has been shown in the events 17 Days Videos Series (USA), Lines in Between the Maze (Berlin) and in loop in the exhibition „Under Another Roof“ in IA&A at Hillyer, Washington DC.
A special 5-minutes version has been shown at the FIVAC Festival Internacional de Videoarte de Camagüey, in Kino Central, Berlin 2019 and in the Screening der Medienwerkstatt 2018 in Berlin, under the title LIFE-X-CHANGE.
Keep in touch to be informed about future exhibitions, or subscribe to the newsletter.

description:
This is a new, independent and amplified version of the video „Walkabout“, which was part of the installation „Under the Same Roof“. Click here to see the work.

In the culture of Aboriginal Australians, the long walks in the desert of individuals who undertake the Walkabout* (as mentioned by Bruce Chatwin in “The Songlines”, 1987) play an essential role in allowing contact and exchanges of resources (both material and spiritual) between populations separated by enormous distances. In my work, I let myself be guided by the idea of the Aboriginal Australians to see a “territory” not as a determined piece of land, but as a dynamic network of paths, tracks, and songs – so well described by Chatwin.
In my video, this network is represented by a web of ropes on an underlying, slowly moving landscape. In four central spaces between the cords, areas of sand take form, in which different things happen: one hand digs a bone from the sand while another hand buries leaf, one pulls out a folded piece of paper, opens it and reads the word “life” which turns into other languages, one hand throws a stone from one panel to the other, new life is born out of things—in short, it is a game of transformation and exchange of objects and words between the different areas. After a while everything is flooded by the sea water. The rope structure loses its geometrical form and the sand dissolves. When the flood retreats, a new network is generated and other scenes arise out of the sand.

* „Walkabout“ has come to be referred to as „temporary mobility“ because its original name has sometimes been used as an inappropriate term in Australian culture, ignoring its spiritual significance. 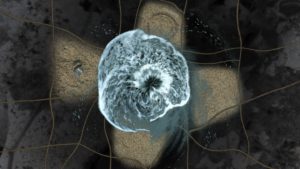 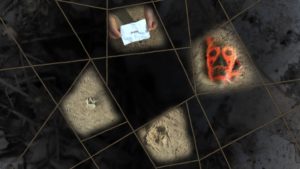 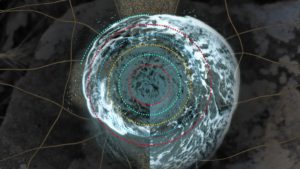 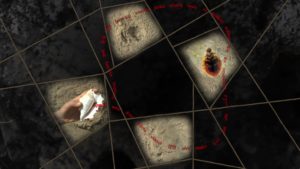 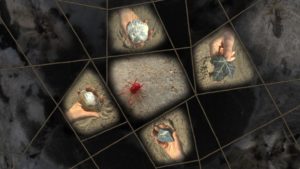