an artist’s book by Maria Korporal

The book Contrapuncti tells the highlight of the legend of the Messinese diver Cola Pesce and emperor Frederick II. The half-man half fish Cola Pesce can stay under water for an almost unlimited period of time and thus search for the secrets of the sea in the deepest depths. The emperor wants to know the conditions of the foundations of his empire Sicily. He promises Cola Pesce a golden cup for his services. When the diver rises from the water and answers the question of the Emperor what he has seen: „Nothing, noble lord,“ the Emperor does not believe him. Ignoring his supplication, he orders the diver to descend even further into the dark depth. This third and last time Cola Pesce does not come back.

The book Contrapuncti consists of two parts: Re maggiore (the emperor) and Re minore (the diver), each starting at the front or back of the book and converging in the middle. So the book has no back. If the book part Re Maggiore is opened, the triangular pages point to the top. The images represent organic forms in which one can recognize facial features, and are printed in warm red-brown and golden colors (the earth). The pages in Re minore point down and are in cool blue-green and silver colors (the sea). Re maggiore and Re minore each have five text pages, in which the legend is cited in as many languages. 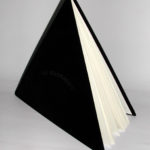 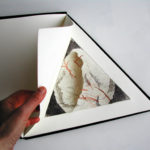 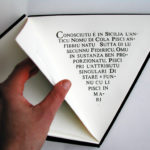