The video above is a short trailer. The full video “Pervitin Power” is 6:37 long and will be showed for the first time in the exhibition “Verfremdung” in Gallery VBK, Berlin, from October 29 to November 14, 2021. More info coming soon!

Pervitin was the drug of Nazi Germany: a methamphetamine, which increases wakefulness and physical activity, and decreases appetite. Like most addictive substances, methamphetamine can give users a feeling of pleasure, confidence, and energy beyond what they normally experience. The “meth high” involves both physical and psychological changes, which manifest themselves in euphoria and, at the same time, emotional blunting: people become less aware of their feelings. It is said to spark a great enthusiasm, as well as a feeling of confidence and omnipotence.
Pervitin was officially prescribed for soldiers and certainly contributed to the success of the Blitzkrieg and subsequent German invasions. But over time, the addiction and side effects of the drug became fatal to the German army: people, while strongly addicted, experienced the symptoms we know today such as nausea, hallucinations, and diminution of cognitive capacities, anxiety and depression.
To read more about the subject: https://thesecuritydistillery.org/all-articles/pervitin-how-drugs-transformed-warfare-in-1939-45

Pervitin is known in our time as Crystal Meth. As most people know, it is a nowadays an illegal drug which brings misery to many people.
“Meth” is also the Jewish word for “death”, and came to my mind in connection with the Prague legend of the Golem, which has fascinated me for decades. In Jewish folklore the Golem is an animated anthropomorphic being, which is entirely created from inanimate matter (usually clay or mud). It is brought to life by writing the word EMETH, meaning “truth”, on its forehead. To disable the Golem, one can erase the E from EMETH, creating METH – “death”. The legend of the Golem inspired the Czech Karel Čapek to write R.U.R. (Rossum’s Universal Robots), the 1920 play that gave the word „robot“ to the world.
The formula METH-EMETH functions as a mechanical method to simulate a consciousness at will. It strongly reminds me of the Nazis practices and of other war leaders, who intend to manipulate their soldiers with narcotics, stirring up their will to assassinate. The drug puts them in a state of trance and less aware of the atrocities they commit. They act as non-human robots do. However, we ought to call this behaviour inhuman.
In my work “Pervitin Power” I try to express these thoughts. The video has been recorded in 360° in a room of the Schwerbelastungskörper, a large cylinder made of concrete in Berlin. It was built in 1941 to study the feasibility of constructing large buildings on the area’s sandy bottom, in preparation for the planned construction nearby of a massive Triumphal Arch, that Hitler wanted to build for his Germania city project. The arch was never built, but the cylinder is still there. See also https://en.wikipedia.org/wiki/Schwerbelastungsk%C3%B6rper
In this room charged with history, I take on the role of the soldier and discover that my clone is sitting opposite me. After simulating a Pervitin shot and putting on a gas mask (an original WWII item), a change of consciousness takes place. Concepts such as TRUTH, HUMAN, ROBOT, POWER, ALIEN are written on the foreheads of me and my clone. From these emerge animated drawings and images. They move through the space like hallucinations and culminate into a violent climax. 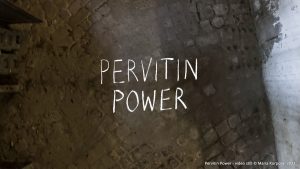 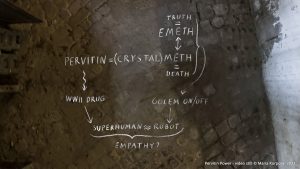 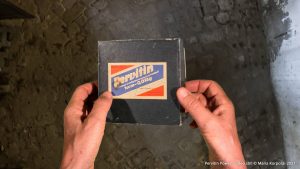 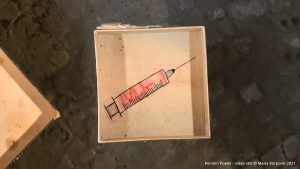 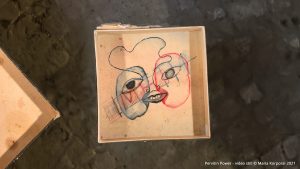 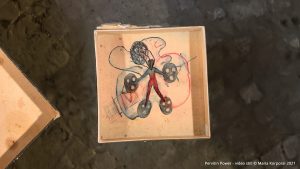 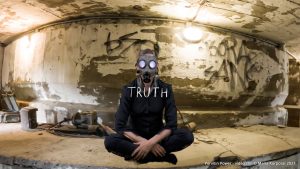 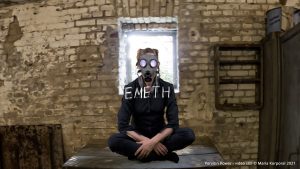 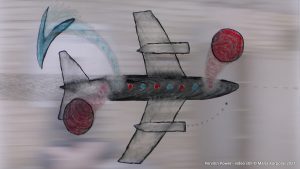 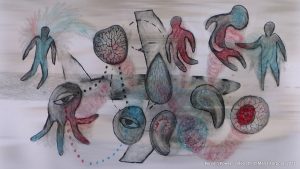 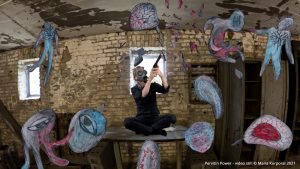 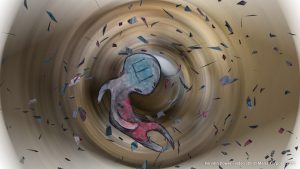 * Edoardo Pistolesi Somigli is co-founder & Station Manager @ Dots Unlimited Radio, a multichannel webradio dedicated to free music, sound research and new forms of communication and language: www.duradio.net
Knob-twiddler in the field of experimental music, fond of all possible links between sound and psychology, undergoing multiple ambient/noise/psychoacoustic creative projects plus -within the scientific community- currently approaching sounds and frequencies to be applied in several alternative cognitive-behavioral therapies in the treatment of various forms of OCD, freely and originally inspired by some tests conducted by Jean Piaget in the 40s of last century. He has already collaborated with Maria Korporal in the projects ZoOm into my Room and Is a dot a black hole?

ZoOm into my Room