Reynard (Dutch: Reinaert; French: Renard; German: Reineke or Reinicke; Latin: Renartus) is the main character in a literary cycle of allegorical Dutch, English, French and German fables. Those stories are largely concerned with Reynard, an anthropomorphic red fox and trickster figure. His adventures usually involve him deceiving other anthropomorphic animals for his own advantage or trying to avoid retaliations from them. (from Wikipedia) 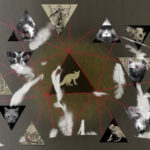 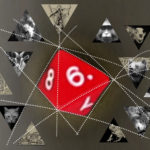 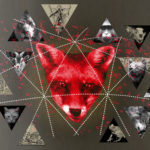 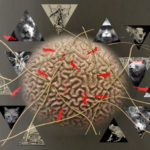 The work is based on the 13th Century Middle Dutch version of the story: “Van den vos Reynaerde” (About the Fox Reynard).
The 12 triangular canvases represent 12 animal portraits, some of them major enemies and victims of Reynard. The fox himself appears in various scenes of the video, which is projected in a central space, surrounded by the canvases.
The triangle is an important feature of the video, it refers to the triangular form of the fox’s head, and is fundamental to the narrative structure as well. Each of the three main scenes is introduced by throwing a triangular dice, the result seeming to determine what will happen. The surfaces of the dice become the setting in which the story takes place, while moving lines emerge from the sides and angles, covering and connecting the surrounding canvases. The dice results are 3, 6 and 7, highly symbolic numbers which form the starting point for each of the three chosen parts of the story.

The installation is the tenth work in the Korporal Zoo project: a series of videos dealing with the relationship between animals and human beings, studied from cultural, social and environmental points of view. 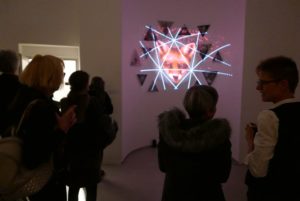 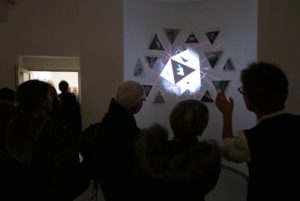 title: Reynard the Fox
technical description: Video installation with 12 triangular canvases, digital prints with manual intervention, and a video-mapping projection playing with all elements.
size and materials: The size of the whole installation is variable, it can be recomposed and adapted to a room or an environment. The work consists of 7 triangular canvases of 30x30x30 cm and 5 of 40x40x40 cm, a video projector and 2 small speakers. The entire surface (projection and canvases) is about 240×180 cm.
length of video: 7’30” in loop
year: 2018
background sound: “Village Morning” by dobroide
music: “The Screaming Jungle” (excerpt) by Fearless Super Pictures
and “The Labyrinth” (excerpt) by The New York Underground Orchestra, conducted by Assif Tsahar
all other art work, recordings, camera, image & sound processing, animation & montage: Maria Korporal